Mr. Hedgehog is alive again and would like to share EVS experience of our volunteer Marysia in Lisbon.

…is 105% positive (disclaimer: that doesn’t mean all of the situations are easy, far from that!). As a volunteer I was engaged in many different tasks so far – from bending 1500 paper sheets with Christmas wishes, to making video interviews with local associations from scratch and being responsible for social media channels of the Sport & Youth Department, which is my daily task (you can watch one of my first productions here: http://bit.ly/2nrGeNI). Some of the tasks are individual but very often I work also as a team with fellow volunteers from Italy (Paola & Roberta).

Here you have a quick review of some of the initiative that we participated in while working in the local ciy hall (Junta de Freguesia de Carnide). 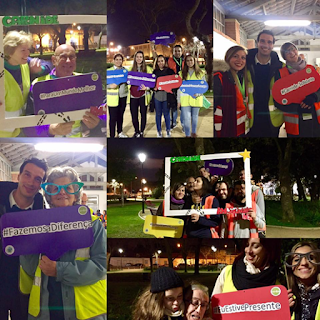 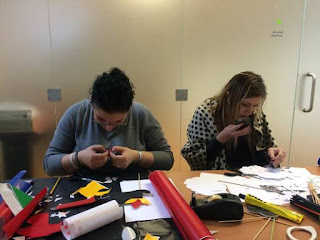 1.      Participatory Bugeting
Two of our projects wins the prize and will be financed by participatory budgeting founded by Lisbon City Hall. We were responsible for communicating the projects to the community (by facebook,  and in person – delivering leaflets & posters).

2.      Solidarity Walk
Solidarity Walk is a charity event with a purspose. For each walk we work with different local charity organization. In order to participate in the walk, every person has to bring something to donate (for example we collected baby clothes for the babies, animal food for the pets and so on). The choosen organizations work closely with the poorest families from the neighbourhood. There are always some suprises during the event. For the first one we prepared some props that were used to make funny photos. 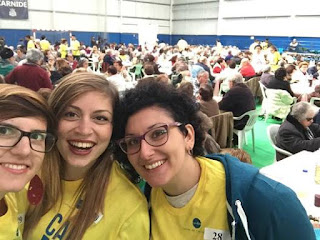 It’s a revitalization project of the old part of the biggest social housing district on the Iberian Peninsula (and second in Europe). The old part is partially abandoned as the cozy little houses are very old and sometimes in a bad sshape. There are going to be demolished in a few years, but right now there are still home to the oldest inhabitants of the district. The local city hall wants them to fill included and looked-after. That is why they plan to clean front yards and reprint the house that are already abandonned. The empty yards will be offered to the inhabitants so that they could have their own vegetable patches.
4. The same quarter (Bairro Padre Cruz) is now the biggest street art gallery in Europe (there are almost 100 graffities on a quite concentreted area). We were lucky to participate in a course for the local guide organized by the Urban Art Gallery (cultural department of Lisbon City Hall).

5. Sometimes we have also time to actually sightsee. On the very begining we went for the On-Arrival Training to Braga.

6. On the 6th of January (and in June as well) the local city hall organizes a big dinner party for the eldest inhabitants of the district. This year we served meals to 550 people. Every volunteer had at least one table to serve.

Have a nice weekend,


Thank you, Marysia, for sharing and wishing you good luck in your project! 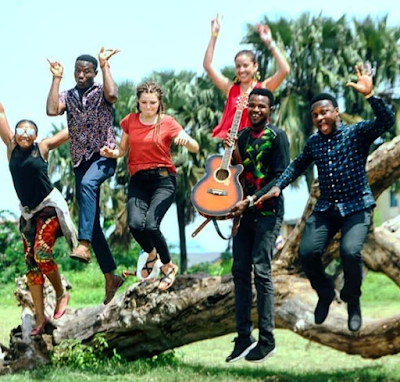 Traveling is very important to me. Since I was 18 years old, I spent at least 3 months every year in other countries. Talking long hours with lorry drivers while hitchhiking in Europe. Wandering through villages in the Moroccan Atlas Mountains. Spending hours on benches in Spanish parks talking with old men. Or discovering vibrant nightlife with younger ones in Tel Aviv. Traveling means looking for knowledge about my greater passion - human beings. Exposing myself to different cultures, becoming more aware of myself in individual and global contexts. It’s simply how I grow up.
I decided to participate in this program because I had to assure myself that I am making a good decision about my career path. I wanted to combine my love for travels and exploring places, contact with other people and cultures, interest in global politics and social development and passion for media, communication and journalism. And a little bit to prove myself, that I can become friends with everyone. No mat… 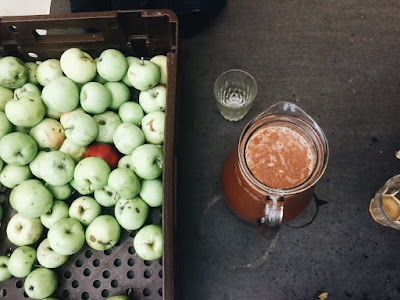 Dzień dobry! My name is Ayşegül from Turkey and I am currently an EVS volunteer in FIYE Poland. My job here is email contact with partner organizations and volunteers coming here for workcamps. I am getting applications for workcamps, promoting workcamps, hiring volunteers for workcamps, evaluating workcamps, preparing infosheets for workcamps and one day I realised “Wait.. I’ve never been in a workcamp before”
When I realised this in mid summer it had already been 3.5 months in Poland and there were not many camps left to choose. An advantage of being volunteer in an organization office is when someone is looking for urgent volunteers instead of a cancellation, you are the first person know about that - I know, not fair. One day I received an e-mail from organization in Czechia, they had vacancy in Eco Centre in Horni Marsov due to a last minute cancellation.
Horni Marsov is a small town in Czechia close to Poland border. It has beautiful environment and national parks. SEVER is center… 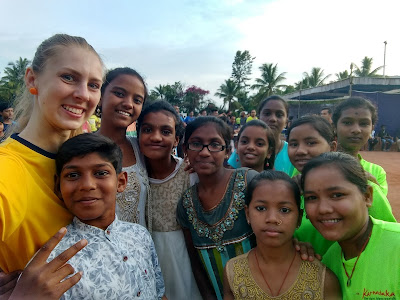 A Unique Place to Call Home - EVS Experience in India

Being an EVS Volunteer is not only living in another country and meeting new people, but also a great journey to know yourself better. When I was packing my luggage and later saying goodbye to my family and friends, I could not imagine that a few months in India would change my life from inside out. I strongly believed that my decision to accept the challenge to be an EVS volunteer in Ananya Trust, an organisation that is taking care of underprivileged children through non-formal education was the best decision I ever made and the best investment. Now, after 5 months, I can easily observe how many new things I have learnt and the changes I experienced in my personal and professional development.

My project is a residential one, where during the week you are living together with 60 kids on a campus. Sometimes it is overwhelming and causes a lot of frustration and stress, but as soon as you see the smile on their faces, you realise how lucky you are, and all the negatives effects go away…